Design a site like this with WordPress.com
Get started
Skip to content
Pierre Lagacé Chapter Six July 14, 2019July 14, 2019

Back in his home country, Wilhelm had worked in various companies as a locksmith. The war was lost and so was his plan about the navy to complete a technical degree. He did not have Abitur*, and the times were not so favorable in the early years to resume this plan.

Note
Abitur means high school grade to continue and study on in an university in Germany. Abitur is the graduation of a Gymnasium, a German grammar school.

After his daily work he went to evening school and on 13th of December 1957 he received his master examination in mechanical engineering. He often said, “If we had not lost the war, today I would have been able or in a better condition to have studied and finished the university with an academic degree in technical engineering will full recognition. 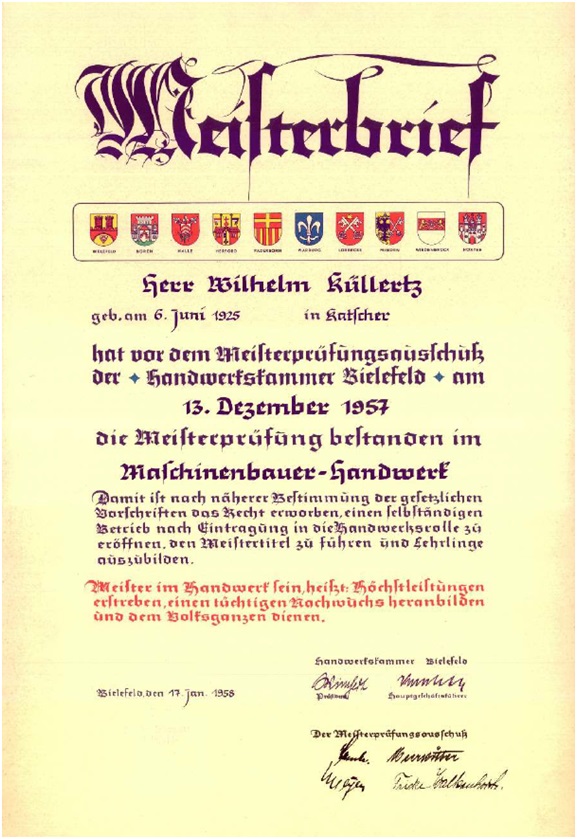 In 1955 and 1956 both his parents had died, and he inherited his parents’ home. He had to pay out his two sisters accordingly. So he decided in 1958 and 1959 to go abroad, where currently in a short time more money than in Germany. In Colombia he worked at Pizano Triplex y Madeiras, a large manufacturer of wood-based materials in Barranquilla, as the workshop maintenance manager. In 1960 he was then back again in Germany. He found work at Kleibaumhüter Maschinenbau in Wiedenbrück.

After the death of the owner in 1961 he took over with his friend and colleague
Willi Stemick and started the business and founded his own company “Küllertz & Stemick – Mechanical Engineering and Turning” in Wiedenbrück.

In 1962 he founded a family of their own. He married his wife Elisabeth née Ewers. The family has two sons.

Wilhelm Küllertz approx. 1955 – 1960 (from the personal collection of Wilhelm Küllertz)
For health reasons, after a serious operation he got a stroke. At the time, the two sons were still too young and not yet sufficiently qualified to take over the business as it was originally planned.

His partner Willi Stemick, who was about 10 years older, had been in retirement for several years. The company was closed in 1988. As a pensioner Wilhelm Küllertz often expressed the wish to go to France again, where he had been in captivity. He was still hoping to see again someone from the family with whom he had spent part of his life.

His wish would probably have come true. He still had many plans as a pensioner. Plans for such a trip did not come because on September 15th, 2000 Wilhelm Küllertz died. His straightforward, honest, industrious and kind human nature has always distinguished him. With those who knew him, he left many lasting memories. He is still very well remembered by Fauré-Roux family.

Wilhelm Küllertz as a pensioner approx. 1995 – 2000 (from author’s private collection)