Design a site like this with WordPress.com
Get started
Skip to content
Pierre Lagacé Chapter Five July 14, 2019July 14, 2019

From the remaining crews of both sunken ships, the naval battalion “Narvik”, was formed shortly after and it was located in the Gironde-Sud fortress. This was a welcomed support to the units who were there. The Battalion headquarters was located in St-Vivien and the task of the unit was to monitor of the perimeter of the fortress by several blocking points. Thus unintentionally Wilhelm Küllertz became like his comrades a foot soldier from then on which was quite dangerous.

For the most part, the fortress was spared fighting. However targeted attacks by FFI pose a major problem. The FFI fighters were not recognizable as such, since they did not wear a uniform. Any civilian could have been a FFI fighter and be a potential danger. FFI attacks were extremely feared.

The second major problem in the fortress was the inadequate supply of food for the troops. Sometimes, however, there were ways that get food. It has been reported that one night, in a well planned action a cow was caught in the meadow and slaughtered.

So the fortress existence dragged on until mid April 1945, when the French liberation troops under colonel Milleret stormed the fortress. Suddenly everything went very fast and every day was marked by constant fighting. The French ground forces received support from US bombers. It was the first time napalm was used massively to dislodge the last remnants of German defenders and killed them. 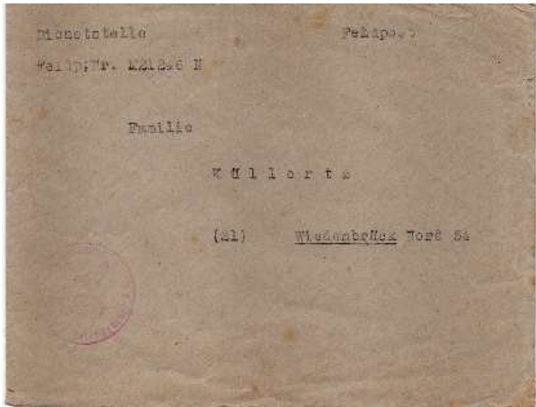 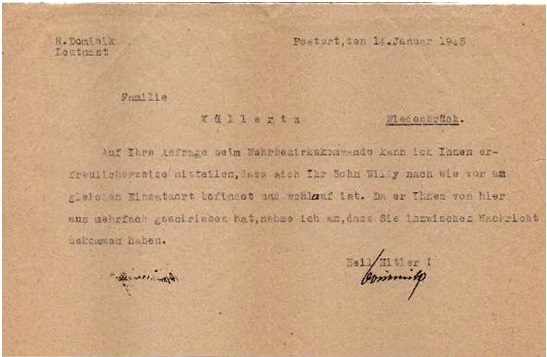 Formal notification of the soldier’s whereabouts on the front line – above the envelope, and below the content (from the personal collection of Wilhelm Küllertz)

During these waves of attacks, Wilhelm Küllertz was near St. Vivien. He was involved in hand-to-hand combat with a dark-skinned US soldier. In this fight – man against man – this attacker wanted to stab him with his bayonet. Wilhelm stopped the attack by reacting with a defence movement. Instead of being killed he was finally able to escape. Only a permanent scar on his ring finger reminded him every day of this minor incident. According to WAST* information, he was captured on the 19th of April, 1945 near Le Verdon.

NOTE
WAST means Wehrmachtsauskunftsstelle which is an official German federal agency in Berlin to explore the history of WWII soldiers with any kind of documents and reports. 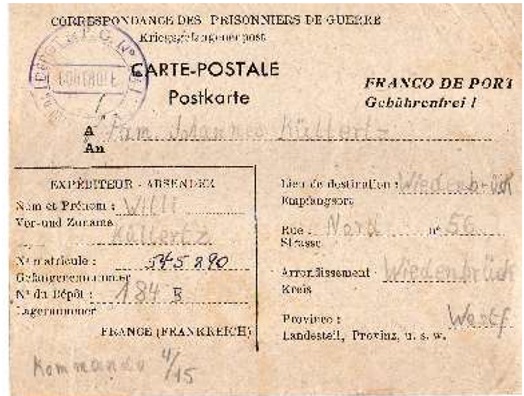 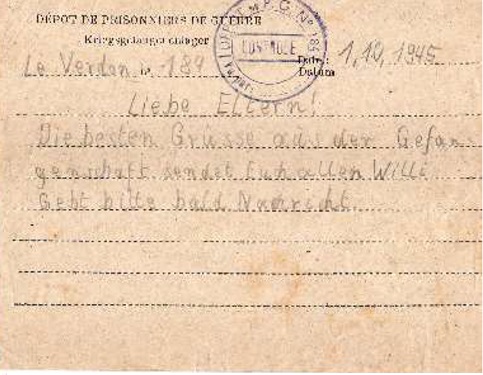 First, Wilhelm Küllertz spent about the first year of his time as a prisoner of war in the PG Depot 184 in Soulac. His duties there included, among other things, were deforestation and forest clearing work, the construction of wooden houses and other buildings and searching and defusing mines. According to his accounts, the minesweepers had the highest rate of injured and dead prisoners of war. According to his accounts, often only 8 out of 10 people came back to the camp in the afternoon from a mine-clearing operation. Accidents causing deaths were common among mine sweepers. He was lucky and he remained accident-free. Also he reported about the bad food supply situation.

According to his accounts, the guards (mostly French colonial soldiers) almost daily, before the morning roll call, had to carry out the dead bodies of the prisoners of war who had died the night before. They either had died for lack of food or from infectious diseases that were prevalent in the camp. The sanitary conditions in the camp were extremely poor, paired with hunger and deprivation, which was a good breeding ground for death. 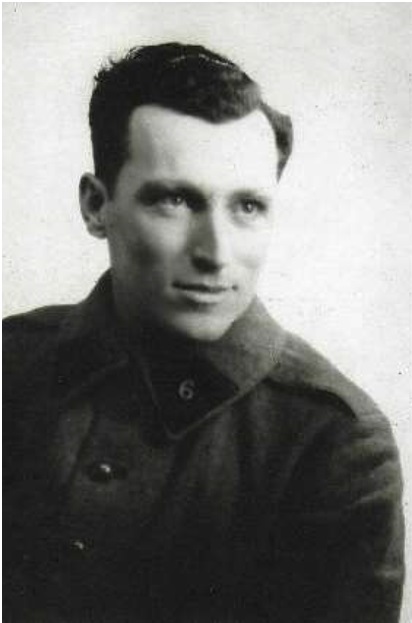 Hard to believe: Wilhelm Küllertz as a prisoner of war. Visibly emaciated and downright deformed, probably due to malnutrition and physical exhaustion (source: Fauré-Roux family).

But fate would be good to Wilhelm. He was lucky and could finally leave the camp. From then on he served as a laborer on the farm of the winegrower Albert Fauré-Roux in St-Gaux near St-Germain d’Estuil. His duties there were about taking care of cattle, working in the vineyards and taking care of all the work that had to be done. Although he was a German prisoner of war it did not take long to practically became part of the family. His patron Albert Fauré-Roux had been in the same predicament in World War I. According to his daughter-in-law, he had been as a French prisoner of war working for a German farmer. So this is why he probably knew how important it was to be fair and decent with Wilhelm.

Wilhelm Küllertz enjoyed many freedoms on the farm. So regularly he got pocket money, for example to drink a beer in the village on Sundays. His patron often meant well with him. Regularly he had a few bottles of wine that Albert gave him. Albert always said that Wilhelm should keep the red one for himself and drink it himself, because it would be good for his health. He should better exchange the white wine for cigarettes because white wine makes shaky fingers anyway.

In short, the patron and his German prisoner of war were mutually beneficial to each other.

Albert’s parents were not ready to live under one roof with a German war prisoner, so a new building had to be built. Building this house was one of the jobs Wilhelm had to assist and help. Also during the building of an extension to the new house, he had to live in an old building on the other side of the street in a separate room, which is still used today as an office. Instead of running water, he had a fountain in the old building directly in the courtyard in front of the house. 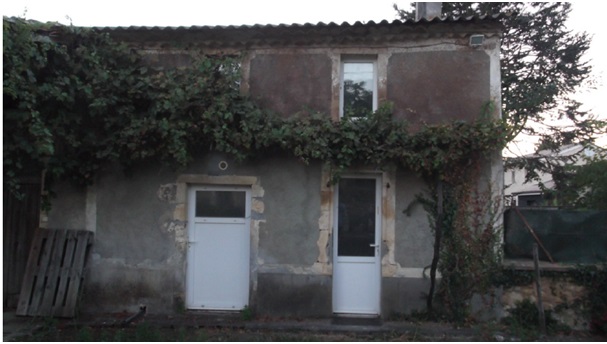 The old residence of the agricultural estate in St-Gaux, in the summer of 2018.

The German prisoner of war was housed in an attic (from the personal collection of Wilhelm Küllertz). 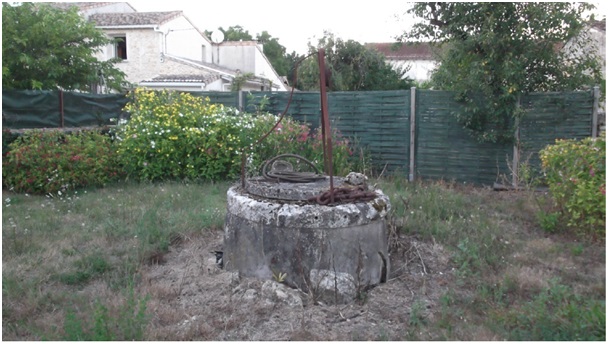 The old fountain in the courtyard still exists, today no longer in operation (from the personal collection of Wilhelm Küllertz) 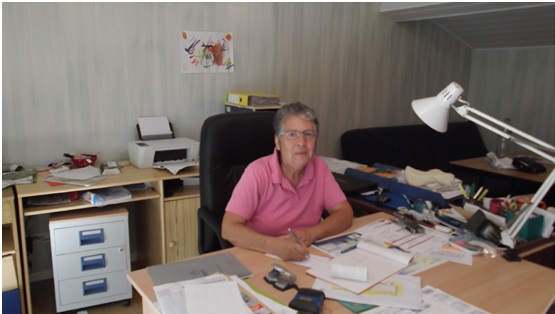 It’s in this attic that the prisoner of war was living. Today the room serves as an office. On the photo is Mrs. Claudie Fauré-Roux, daughter-in-law of Patron Albert (from a personal collection)

There was also a close friendship between Wilhelm Küllertz and Denis Fauré-Roux, Albert’s son. Denis was born in 1944. The little boy of that time felt that the German war prisoner was a great strong brother. Denis died in 2010 at the age of 66. For all those years he had fond memories of his great friend Wilhelm, called Willi. Denis often told his family about the great time he had with his friend so the family knew many stories and details of this great friendship. In the first few years after Wilhelm’s return to Germany there was still regular correspondence.

But over time this contact stopped. The reasons are still not known. One had then assumed over the years that Wilhelm Küllertz would have died in a plane crash. But it was completely different.

Wilhelm Küllertz remained a prisoner of war on the farm until almost the end of 1948, and he wasn’t back home in Germany until Christmas 1948. When he was just 17 years-old when he left his parents’ home and went to war. So for more than 6 years he had had the most beautiful years of his life far away from his homeland, and was captured in a war. Wilhelm had to join the navy instead of joining the army and be a cannon fodder in the Eastern front in Russia. 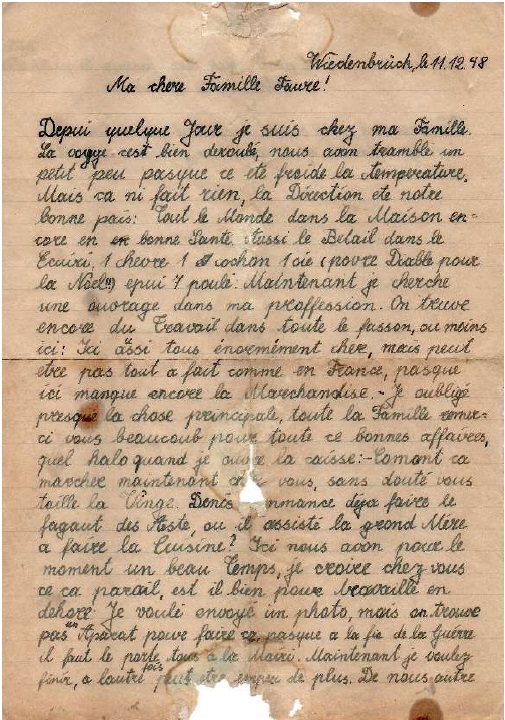 Letter of 11 December 1948 after his arrival at home – front (Source: Family Fauré-Roux) 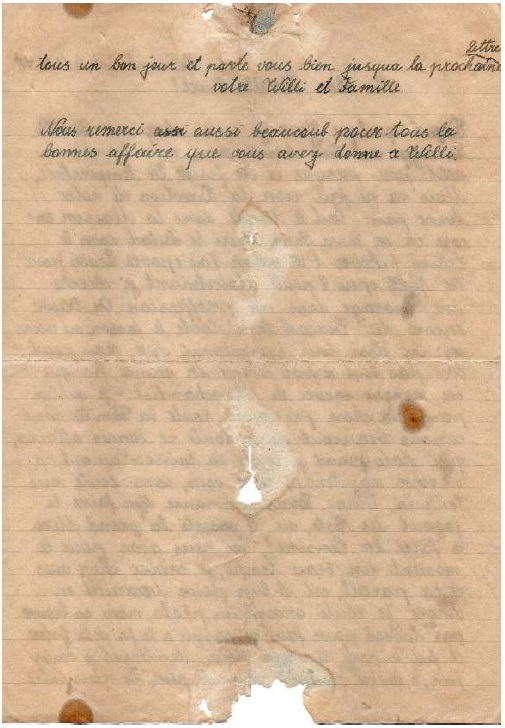 Letter of 11 December 1948 after his arrival at home – backside (Source: Family Fauré-Roux) 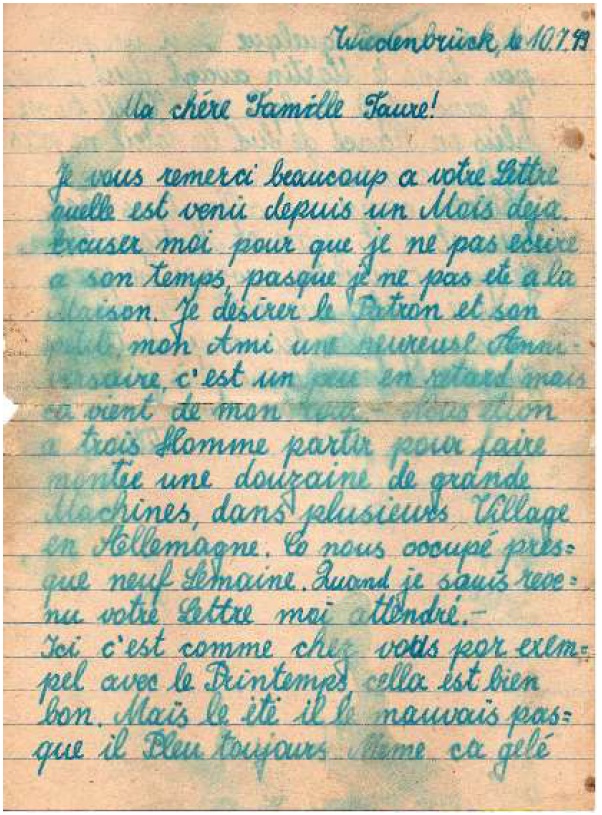 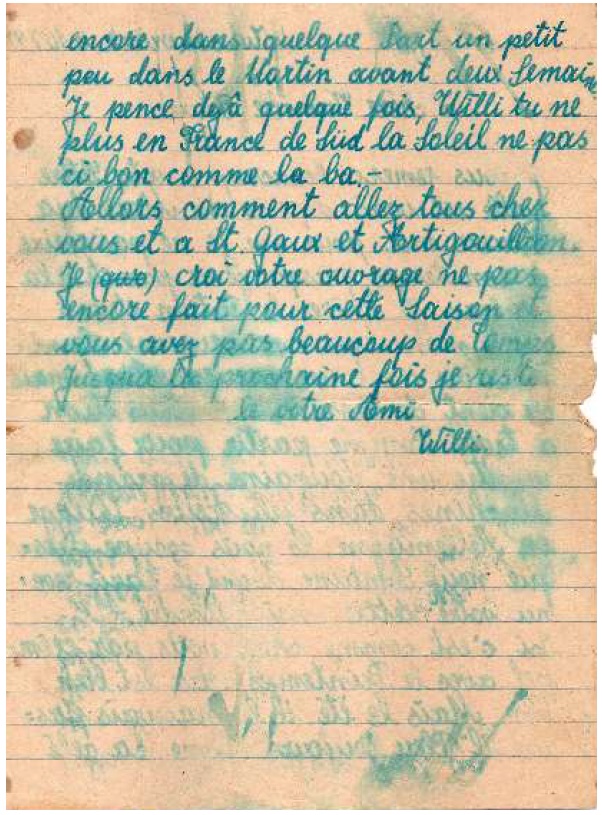 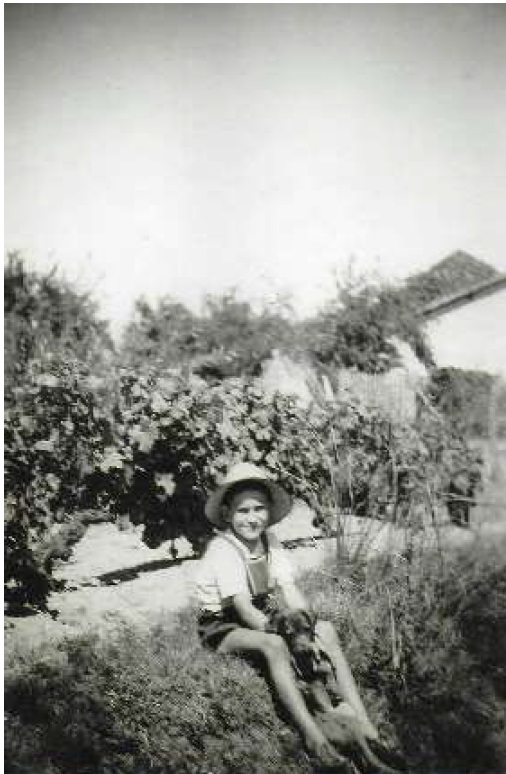 Denis Fauré-Roux, the only child of Albert and his wife
(source: Fauré-Roux family)